An English heritage  blue plaque commemorates where Henry Cole lived and worked at 33  Thurloe Square ,  South Kensington , London, opposite the Victoria and Albert Museum. [ 7 ] Who is he? Sir  Henry Cole  (15 July 1808 – 18 April 1882) was an English civil servant and inventor who facilitated many innovations in commerce and education in 19th century  Britain .  As one of the Commissioners, Cole was instrumental in the decision that the £186,000 surplus from the Great Exhibition would be used for improving science and art education in the United Kingdom. Land was purchased in the South Kensington area and developed as the centre for a number of educational and cultural institutions, known half-jokingly as " Albertopolis ". Henry Cole was appointed the first General Superintendent of the Department of Practical Art, set up by the government to improve standards of art and design education in Britain with reference to their applicability to industry. In this capacity he was
Publicar un comentario
Leer más 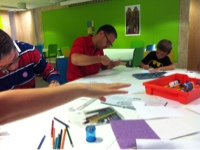 Sunday 2pm . 4th August The National Gallery Family Programs are really amazing.  Free tickets.  This is a great opportunity  to families to spend time together,  learning through art amazing stories and sharing handmade experiences in the workshops. Three women receive us in the lobby of The National Gallery Educational Center. They are kind and introduce the activity for 5 minutes while parents and children are seated on the floor.  There are foreing families. Paul, Jammie, Tess and David came from Spain. They are in a summer camp and it is their first time at a family programme in a Museum. Their uncle Tony join them in the cultural activity. There are more families. From Asia, and India too. So diversity is something to take note for a first sight.  We all move to gallery 52 where the fisrt activity was taking place. We cross some big Galleries to reach it. Finally we get it. We cross the family secure line that marks the specific programm
Publicar un comentario
Leer más
Más entradas